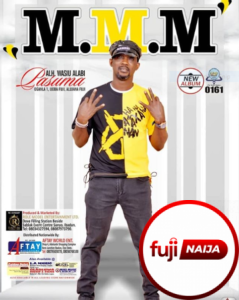 Fuji music star, Alhaji Wasiu Alabi Odetola popularly known as Pasuma is about to release a new album and he calls the title, MMM. Are you curious about his choice of title? Yes, the term “MMM” should evoke some unpleasant memories from those who were gullible enough to invest huge sums in the failed popular money doubling scheme founded by late Sergei Panteleevich Mavrodi, a Russian financial fraudster. His multi-million Naira fraudulent scheme was widely and simply known as MMM. But this time, what has a Fuji music star in Nigeria got to do with MMM?
Well, Pasuma is an artist who loves to do things differently from others. And in his style, he has decided that the next level for his brand of music is to come up with his own version of MMM. And he is hoping his teeming fans would accept it warmly and widely like they have always accepted everything he has done in the music industry over the years.
Remember, Pasuma has become a role model for a lot of youths such that they relish doing most of the things he does with his lifestyle, especially his dressing style. When he came up with carrying shoulder bag some years back, carrying of shoulder bags by a lot of youths became the in thing in fashion. And when he also started wearing base ball cap on native dress, a lot of youths still followed him en masse in doing so. So, there is that tendency that a lot of them will also accept his coming MMM.
You must have been deeply drenched in suspense by now, so it would be right to let the cat out of the bag fully. The real gist is that Pasuma’s MMM like Mavrodi’ also has to do with money, as well as making it, and again a machine. In other words, the full meaning of Pasuma’s brand of MMM is: Money Making Machine (MMM), which is the title of his next album and not a Ponzi scheme like the late Russian man.
The album according to Pasuma in a live Instagram interview recently, would be released for the forthcoming Muslim festival, Eid-El-Kabir, which is expected to fall on July 31st, 2020. And without doubt, Pasuma’s titling the new album MMM at a time the global economy is going through a major down turn is a creative way of attracting everyone attention to it just like it must done to yours in this story.
Pasuma remains a major player not just in Fuji music, but in music generally and he has always succeeded in doing his own things in a unique way, especially titling of his albums. Some of the titles of the albums he has released so far in his career include: Recognition, Choice, Orobokibo, Computer, The man, Confidence, London experience, London Scope, African Puff Daddy, Entertainer, Americana, Extravaganzer, Desperado, High level and joker (2in1), Judgment, Unique and superior (2in1), Fuji Motion, Maintain and Sustain (2in1), and Initiator.
Other albums are: Importer and exporter (2 in 1), Stability, In and out, Brain box and Stardom (2in1), Infinity, Role Model, Feel it, Ability, Yankee Party Time, Sure pass, Influential, Purity, December Tonic, Torin Tilu, My World (Hip-hop album), Me, Myself and I, Gateway, Undefeated, Compatibility, Game changer, Goodness and Mercy, Wisdom and Maturity, Gratitude, Testimony and Advice, Hello and 2020, and now MMM is on the way.
Will MMM also beat his past albums in terms of melodious and entertaining songs like his new album has always beaten the previous one? Only time will tell.