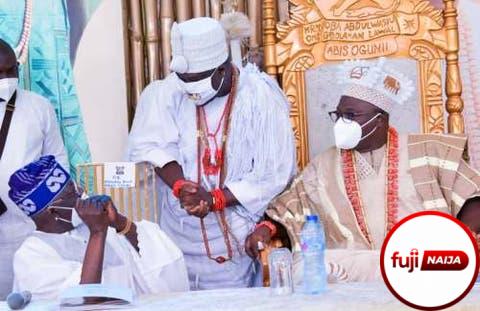 The manner in which Bola Tinubu, the National Leader of the All Progressives Congress greeted the Ooni of Ife, Oba Enitan Ogunwusi at the coronation of the Oniru of Iruland, Oba Omogbolahan Lawal has been raising dust on social media.
In a video which had gone viral, Tinubu remained seated as he greeted the Ooni, a position, which many social media users consider to be disrespectful to the Ooni and his throne.
Social media users unearthed videos of late Western region premier, Obafemi Awolowo, who had stood up at the entrance of the then Ooni, Oba Okunade Sijuwade, Olubuse II at an event.
Also, the instances where the former president, Olusegun Obasanjo, prostrated for the Ooni, and the monarch of Gbagura, Ogun State, Oba Sabur Bakare have been shared several times.
Apart from social media users, Yinka Odumakin, who is the spokesman for the pan-Yoruba group, Afenifere, said that the Tinubu should have stood up as a sign of respect for the first class monarch.
Odumakin said, We are still Yoruba people. With due respect to our royal fathers, we should not say because we are in a modern age, we should not give the proper respect that we give to our oba. You saw the time former President Obasanjo prostrated before the Ooni. So, it is still our culture and we must sustain our culture and give the respect that is due to our monarchs.
Former minister of Aviation, Femi Fani-Kayode, also slammed Tinubu for disrespecting Ooni by not standing up.
Via his Twitter handle; Fani-Kayode said, That the Asiwaju of Bourdillon refused to stand up to greet the Ooni of Ife speaks volumes. This was not only deeply insulting to every Ife and indeed son and daughter of Odua but it is also a crying shame. Would a northern political leader refuse to stand up for his traditional ruler?
There are, however, those who believe that Tinubu didnt disrespect the first-class oba, that the APC national leader wields more power than the Ooni, thus, there was nothing wrong in the manner of greeting.
A Twitter user, Prince Dagus @Dagusprince tweeted, You people insulting Tinubu over this greeting matter. Whats your problem? Did Ooni complain to you? There are some people in Yoruba land that doesnt prostrate for kings. Im sure Ooni understood such.
Retired Activist @streetprince007 said, Tinubu is not a Yoruba man. A Yoruba man knows what to do. Thats all I can say.
Mafe Sunday @mafe_sunday said, For a typical Yoruba man to defend this disrespecting act shows that we are fast losing it, if Obasanjo, a former president and an older man than Tinubu, can prostrate before Ooni, he has no excuse not to prostrate. This is us, this is who we are, this is our culture, our identity.
Ayobami Ayobami @dondekojo, The Ooni walked to Tinubu to greet him, please. Its a non-issue. Tinubu is bigger than the Ooni. You people should rest, next time Ooni should prostrate to Asiwaju.
Benjamin Amaechi 2 @2_amaechi sharing a photo of Obasanjo prostrating for the Ooni, said, Baba bowed before the Ooni. Is Baba less a Yoruba man than Tinubu?
Chuks.Chinyere (jj) @chukschinyere tweeted, In todays political setting, Tinubu wields more power than the Ooni of Ife. Traditional leaders are subject to the democratic set up which means (someone) like Tinubu wields so much control over (them). This is not 1688.

Ooni of Ife call on government to allow Alumni take charge of the school
Ooni, Alaafin, and other Dignatories Lead Yoruba Leaders To Host 134th Anniversary Of Kiriji War
Ooni of Ife, Oba Adeyeye Ogunwusi, promised to build a multi-million Naira Chemotherapy Centre at the University College Hospital (UCH), Ibadan
Coronation of 15th Oniru of Iruland (attended by well-known dignitaries)
Prev Post
Fuji Singer Malaika is cooking a movie for us Alao Oje WATCHOUT!!!
Next Post
It is not over yet – Ooni of Ife says to Nigerians converning COVID-19