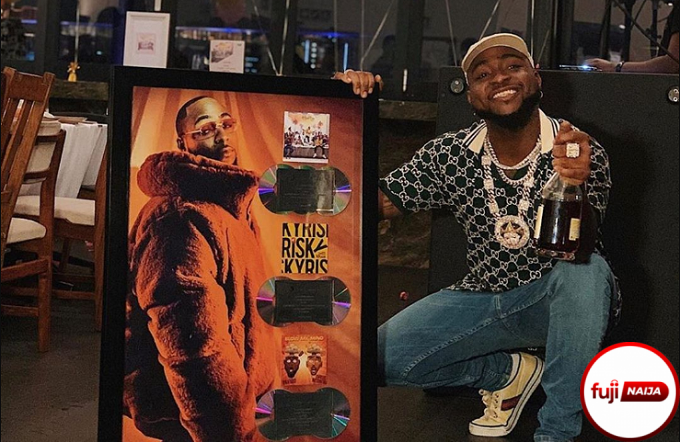 Most people believe Nigerian music superstar, David Adeleke, known as Davido never struggled to achieve anything in his life.
With a rich father, Adedeji Adeleke, and a nickname O.B.O (Omo Baba Olowo) which means the child of a rich father, its a common belief that he got all he has achieved on a platter of gold.
However, Davido took to social media and shared the moment he gave his DAMI DURO demo to Cecil Hammond with the hope that he would get signed.
Davido shared a screenshot of his recent chat with entertainment promoter Cecil Hammond who revealed that he still has the first CD the musician gave him 9 years ago.
Davido, however, rose to fame after releasing Dami Duro, the second single from his debut studio album Omo Baba Olowo in 2012.
In January 2016, Davido announced on Twitter he had signed a record deal with Sony Music and a few months later founded the record label Davido Music Worldwide (DMW).
In 2019, Davido sold out The O2 Arena in London, becoming the first solo African artist to do so.

Recommended:   It Is A Taboo KWAM1 Speaks On S*x With Alaafin Of Oyos Wife

Barry Jhay – Only You (feat. Davido)
The modern African woman is being limited  Tiwa Savage
Davido buys a house in Banana Island (screenshots)
I will tell them what you do everyday – Chioma says to Peruzzi
Prev Post
Simi explains meaning of her Song titled ‘Duduke’
Next Post
Sen. Dino Melaye spotted in Nollywood movie, The Bean Shaped Superhero