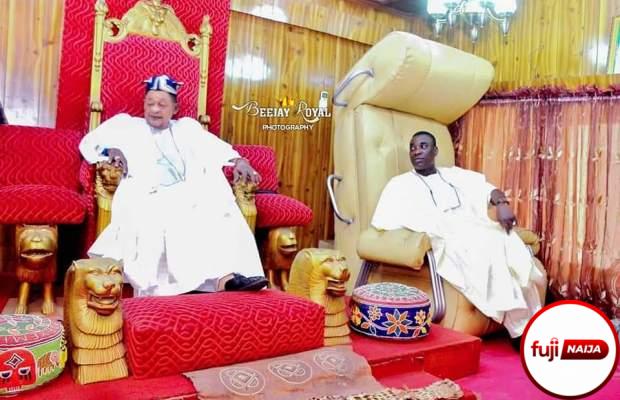 The Freelance and Independent Broadcasters Association of Nigeria (FIBAN) has urged Lamidi Adeyemi, the Alaafin of Oyo, to strip Kwam 1, a Fuji star, of his title as the Mayegun of Yoruba land, for allegedly brutalising Wole Sorunke, its member.
Kwam 1 and Sorunke were said to have been invited to perform at the 60th birthday party of Abdulfatai Akamo, the Olu of Itori, in Ewekoro local government area of Ogun state on Thursday night.
According to Sorunke, better known as MC Murphy, the drama started when he invited Fasina Olajide, his client, to the stage to be eulogised by Kwam 1, as expected of Fuji singers.
The Ogun-based broadcaster, however, claimed that the Fuji maestro snubbed his client, adding that some boys loyal to the singer would later beat him up.
He also disclosed that the Consolidation crooner, whose real name is Wasiu Ayinde, apologised to him after the incident.
But in his reaction on Friday, Desmond Nwachukwu, FIBANs president, condemned the incident.
He also called on the Alaafin to withdraw the singers Mayegun of Yoruba land title, nothing that his action was a mockery of the noble tag.
He said the matter had already been reported to security agencies, adding that FIBAN would also take legal actions against the singer to ensure justice is served.
We would like to tell His Majesty that we are all humans and we can make mistakes, he said.
This is a grave mistake he has made because, as far as we are concerned, the holder of the Mayegun of Yorubaland title must be a man that commands respect and carries himself pretty well, understanding that the image of His Majesty and the entire Yoruba race is what he goes about with.
We would like to tell His Majesty that it is not too late to strip him of that title. We have to understand that this is Yorubaland and this is where culture and tradition are held with a lot of candour.