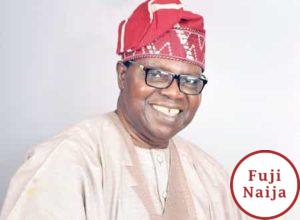 It was earlier reported by some blogs that Legendary musician Ebenezer Obey had died in a London hospital early today.
The family has come out to say it’s fake news, FujiNaija News learned.

According to the musician’s eldest son, Lanre, his father is alive and doing very well.
But giving the lie to the rumor, Lanre Obey further disclosed that his father is healthy and that the public should disregard the fake news.

My father is alive,  I am even right in front of him and he is doing very well. We have been receiving calls from London and every other part of the world. The report of my father’s death is not true because myself and him are actually sitting next to each other as I am talking to you, Lanre Obey said.

Recommended:   God Called me to do Gospel Like Mum  Tope Alabi Daughter Claim's