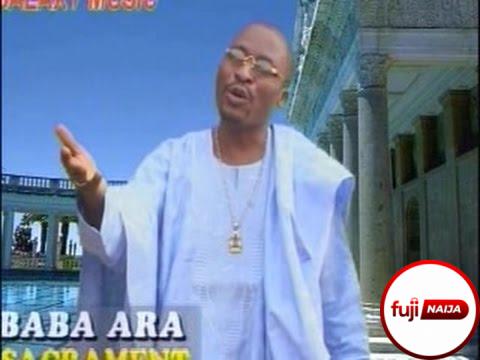 Baba Ara Real Name Roland Oloubukqanla Lolmola Was Born in Abeokuta I Ogun State On July 2nd, 1962 to the family of David Oladipupo Olomola and Mama Folakemi Olomola of Ilesha in Osun State, Nigeria.
He had His Primary Education at Ago Oko Methodist Primary School, Abeokuta Band Baptist Boys High School, and Abeokuta. He later proceeded to Ogun state polytechnic (Now Moshood Abiola Polytechnic) Abeokuta where he real food Science and Technology and graduated with Higher National (H.N.D) IN 1988.

He has been inn gospel music since childhood at the Methodist Church Ago Oko where he was the Assistant Choirmaster before he joined the Celestial Church of Christ, Okiki Imole Parish, and Ipelu Road Sagamu under his brother Asst. Superior Evangelist (Dr.) G. Ola Gbadebo J.P. (Prophet Jimata) in 1987. He started his Glorious Musical Journey in this Parish where he has the enviable position of the Gospel Music“ by his brother, the Shepherd-In-Charge of the Celestial Church of Christ Okiki Imole parish, Sagamu.
He was the Choir Master of the Celestial Church of Christ Kano, 3, Sabon Gari. When he was on his National Youth Service in Kano, between 1989 to 1993. The message to spread the Good News through the Gospel Music was revealed to him in 1989, which he refused due to his Education
Background/Qualification. He later got a job with the Nigerian Bottling Company Kano plant in 1991.
He resigned this appointment in 1993 to actualize his calling.
He recorded about four demonstration cassettes before the popular record of CCC Okiki Imole Parish Sagamu titled “CONVENANT ` which was realized in 1994. After the covenant, he recorded nine other records, amongst are titles like- The Call and the Anointing, Adiitu Agbayanu Nla (Amazing Mysteries), The Word Jekaye Mo (Let The World Know), I AM, BABA UNITED with saints (dedicated to the late celestial Pastor Rev. A. A. Bada), the master key, Halleluyah, including four different live shows he recorded and tagged OKO SELI I, II & III, Sacrament is his latest record.

The ace gospel musician popularly called Baba Ara died on August 31, 2004. His death had all the hallmarks of mystery. He died at the height of his popularity and was just 42 years old. TAYO ADELAJA met Adedapo James Fasanya, known as Bengho 2, Baba Aras childhood friend, producer and manager.
14years ago when ace gospel musician, Roland Olubukola Olomola, popularly called Baba Ara, died, the rumour mill was agog with the probable cause of his death. Among the rumours then were that he took ill from a burst of the cocaine sachet that he had ingested and with which he was planning to travel out of the country.Others said that he must have sold his soul to some occult groups to gain fame and wealth, and to die the way he did.
Yet, to another group his death was as a result of the strong feud between him and his bosom friend who is a shepherd in the Celestial Church of Christ. A decade after his death, a lot of people still hold on strongly to these even as his albums still hold sway in the market.
Adedapo James Fasanya known as Bengho 2, is Baba Aras childhood friend. He is also the producer and manager of Baba Ara from his first foray into music to his demise. Fasanya recalled that he met Baba Ara in 1990 when he joined the Celestial Church of Christ (CCC), Okiki Imole Parish, Sagamu, Ogun State.
Before then, he said that Baba Ara was living in Kano and usually came to Sagamu whenever there was a special programme. Looking back at how they first met, he said simply that, it was the choir master that introduced me to him. I was an instrumentalist at the church. He recalled how young and vibrant the choir of CCC, Okiki Imole Parish was then.
He said that the opinion of the choir then of Baba Ara at the time was that he did not know much about music, although they also identified that he had talent and could sing very well. At first, maybe because of their impression about him, they had problems with him. As an instrumentalist, we used to correct his style of music as he leaned more on percussion than the instrument. It is not a traditional way of playing, Fasanya added.
Baba Ara other than heeding to their advice insisted on having his way. Adedapo spoke further, his concept and style of music were totally different and that created rift between us initially. We were forced at that time to go along with him because he was an active member of the churchs choir. At a point in time, we just tolerated each other for the progress of the choir. The formation of the Baba Ara Band started from the choir and it consisted of four core members of the choir.

At the formative stage, the band comprised of Baba Ara, Dimeji Shodunke, Hassan Bankole and Fasanya. Speaking on the formative stage, he continued, we had to sit down and agree on a lot of issues about the church because we were the nucleus of the church choir. Fortunately, the four of us always met on Fridays and Saturdays every week for rehearsals. During rehearsals, we had several disagreements due to the fact that we were from different backgrounds and had different ideas about how the music should flow.
His concept then was totally new and we tried to modify it in vain. Somehow then, I knew he had a vision He recalled again that, the peculiar thing about the man, Baba Ara, was that he received messages from the church to go into full time music. He declined the various messages then. He used to ask aloud, how can I abandon Food Technology and become a musician?.
He actually did not want to take to full time music due to the stigma attached to the profession. During that period, Baba Ara was living with the Shepherd of the Church (CCC, Okiki Imole Parish) as he had left his job in Kano. He served and worked briefly in Kano.
At a point, Dimeji and I moved in with Baba Ara and we lived together for some time. Our staying together actually built our relationship and understanding of one another. The first record that is credited to him titled Covenant was actually done by the choir of CCC, Okiki Imole Parish.
It was recorded in 1993. After the record of Covenant for the church, Baba Ara sat down with me and Janet Abel who is now in the United Kingdom, he told us about his vision and dreams. We prayed about the forming of a band. That took place in 1994. By then, we had gone with him to record his first personal record, entitled, The Call and the Anointing.
Speaking on the core issues discussed at the meeting, he said that the plan was to launch the record, and as at that time he needed a band to support his musical career which led to the meeting that was held by the three foundation members and Baba Ara. The name Baba Ara according to Adedapo was given to him in Kano because whenever he sang, he would start with the lyrics, Baba Ara, Baba Mimo.
However, he had a band in Kano before resettling in Sagamu, and the band was known as Baba Ara and Happy Souls. When the band was formed in Sagamu was discussing on the issue of name, he wanted them to continue with the same name but they eventually agreed on Baba Ara and Divine Voices International in 1994.
After his first record, it was common to see Baba Ara in a tailors shop at Eleja Area of Sagamu. He was always at the shop of Baba Hassan, the tailor because he was jobless and that man was his close friend as at that time.

Indeed, Baba Ara paid his dues as a musician! he said. When confronted with another rumour linking the cause of his death to the feud between him and the Shepherd of a Celestial Church of Christ Parish. Fasanya sighed and said, I heard about that story too that the Shepherd who was his bosom friend confessed in London that he killed Baba Ara.
I met the Shepherd when he came back from London after the so-called confession. It is unfortunate that the man too also died about six years ago, but the whole story is totally false.
I have challenged anybody to prove it by providing evidence of the alleged confession. At this age, somebody somewhere would have recorded that confession if it was actually true He declared that, for those that peddle the rumours, it is always somebody told me or I heard from someone. Nobody was a living witness of that rumoured confession.
The little I know about that shepherd is that he was a good shepherd and a good fan as well as Baba Aras bosom friend till his death. Some fans of this great gospel musician believed that he had premonition of his death. The belief was hinged on his music messages and lyrics during his lifetime. The producer of Baba Ara did not agree with this school of thought. To him, Baba Ara used his song to remind us of our end as mortals. He said, The problem people have is due to the message coming from Baba Ara.
If you read the Bible, you will discover that each prophet has his own message. Baba Ara believed that one day, you would die and you should be prepared for it. He was fearless and did not fear death. He used his song as a reminder of the end of us as human beings.
His songs were not about death alone but about praises and wisdom. People often refer to the album The Word as their reason for saying so, but he got the message and inspiration from the Bible passages that he read What can be the cause of Baba Ara death?
Why did he die so young? Why did he die when he was just gaining prominence as a gospel musician? Fasanya disclosed that, the years we were together, he was always having malaria. He could hardly go for two months without a bout of malaria. In one of his ministrations, he said that death could come through any means. He said it could come through sleep, accident or whatever means. The owner of our soul whenever He needs it, He gets it, no matter where you are.
The Late Gbenga Adeboye used to say that one who died peacefully while asleep, you cannot really say he died peacefully neither can you say someone who died in an auto accident died terribly because he might have been dead before the crash.

It was time for Baba Ara to die when he did about 10 years ago. He was a man who worked tirelessly and very hard too despite his frail health. Most times, when he was down with malaria, we would still go ahead to perform either at party or other functions. I am sure that you are aware that stress too can kill easily? He concluded that, his death did not have anything to do with all the rumours. Rather, it was destined that he would die when he did.