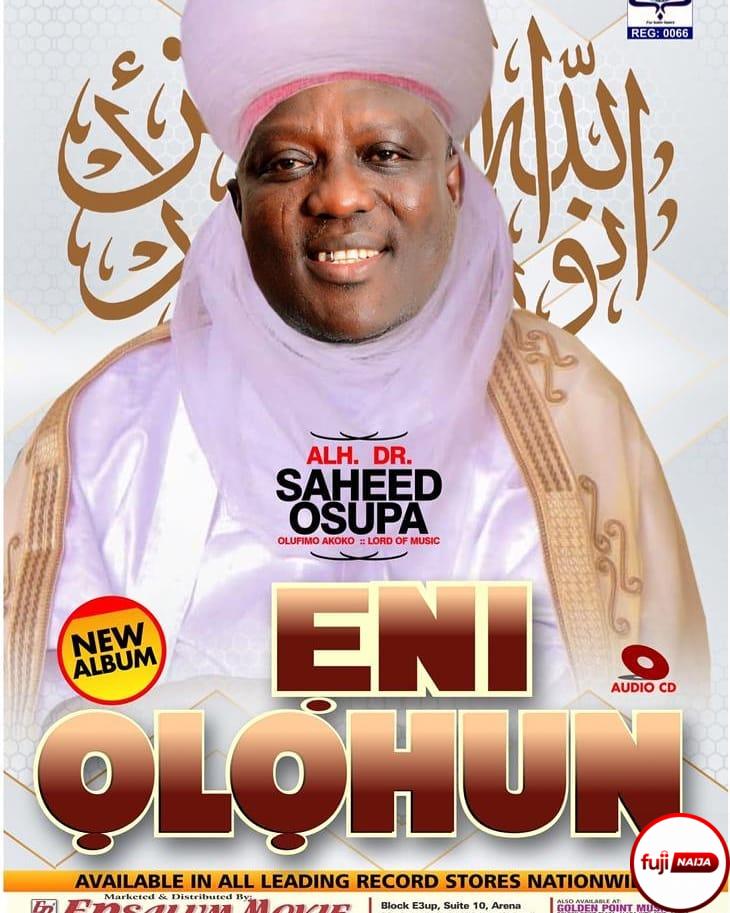 Saheed Osupa Eni Olohun Album: Nigeria Supertalented king of Fuji popularly known as Saheed Osupa debuts a brand new album which was titled Eni Olohun.
Quick Look @ Saheed Osupa Direction Album
Saheed Osupa went completely islamic on this album even tho this isn’t his first time, he has made and appeared in lots of Yoruba Islamic songs. This particular album seems very special to him as he preached and lectures about the Islamic religion.

An Exposition of Humility in Cleric Saheed Osupa’s New Release Eni Olohun
Regardless of our religions or philosophical leanings, we shall find a message in King ( now our Cleric) Saheed Osupa’s New Release Eni Olohun. If we can see beyond the hasty classification that it is a Muslim song, we would see that the track on humility is a pure exegesis, a deep and profound exposition of this salient issue that affects us all.
It is an admonition for the arrogant and a call to be humble as a human. So aside the melodious, and invoking tone of the delivery, there is:
1. An Exegesis of Humility
A.
As we know, the opposite of humility is pride. To re-emphasize his abhorrence for pride & arrogance (which he sings about in his Special Request) Cleric Saheed Osupa drops some defining lines as usual, stating the need for humility, how humility is interwoven with faith, how pride & arrogance are similar to playing God.
Excerpt 1.
omi inu nkan oni iteriba
Toni iwa irele o.
Kaato so iwo alafojudi eda
kogba fun enikankan.
Iwa tutu teyan maani
Ko pe eda laago.
Iwa pelepele teyan maani
loodaju
A humble person is at times
deeply troubled
not to talk of an arrogant person
who disrespects everybody.
Humility is beneficial
and never a sign of foolishness.
Gentle comport is of great
benefit surely.
Excerpt 2.
Sebi Iwa iteriba laale fi mo eyan Olorun
On naa laafi mo eni beru Olorun
Itori iwa iteriba lon gbeni de ibi to ba ga
Kowa si ibi to da laye ju alujanna lo.
Humbleness is feature of a godly person
and of a person that fears God.
Humility elevates people to lofty places.
The best of places is securing bliss in heaven.
Excerpt 3.
Awa Olorun Oba ni kan lale gberaga
Toriwipe awa Olorun sha lale firoyin ara wa
E da sora maa ba won soro igberaga.
It’s only God that can arrogate power
because God’s mightiness cannot
be compared to any except His mightiness.
Every human should beware of arrogance
B.
Our cleric Saheed Osupa further espouses that humility should reflect in our prayers, against the backdrop that humans are helpless on their own. Whether God answers or not, we His subjects need to humbly seek Him knowing our limits, and inability to do it on our…
Excerpt 1.
Olorun ton fun ni
Taba ti beere
Olorun oba ton tun
Ko laati fun ni
ko mi mon se
Kinmaa sina.
God that gives whenever
we ask.
God that doesn’t give
at times when we ask.
Teach and guide me aright.
C.
Our cleric appraises God as the only one that saves humans from evil machinations and illnesses that besiege humans. A remembrance that health is wealth and what arrogance will a person have if they can’t even assure themselves of good health?
Excerpt 1.
Oba gbani gbani
Lowo aburu aye 2
Maa je ki abuuru
Kan wa Olohun.
Iwo tun loba to ni alaafia2
Daku maa sowa di ailalera
God is our saviour
from vices of this world.
Please keep us safe
from evils.
God of peace and healthiness
please give us sound health.
D.
Our cleric advocates acknowledging helpers, facilitators, benefactors because they are like angels ( Malaika of good deeds). As God would not descend to physically help, prayers are always answered through some people who are angels on earth. It takes a level of humility to appreciate them. They work with the Almighty to make the manifestation of our prayers come to the fore.
Excerpt 1.
Alanu mi Mailaika mi
Alaranse mi Mailaika mi
Alatileyin mi Mailaika mi
Kinkan kan maa se won
Ti Olohun bafe se anu eyan
eda ti yoo se anu fun loma ransi,
Enito Olohun ba fi se sababi
Abi into je alati leyin re
On maa lo je Malaika re.
My benefactor is my angel
My helper is my angel
My supporter is my angel
May God keep them safe
When God answers our prayers
He would send helpers in human form
those harbingers of hope and help
are our angels on earth.
E.
Our cleric finally wants us to learn from the victimization of prophet Muhammed in Makkah, how his humility won him a loyalist then from his soon-to-be assailant.
Excerpt 1.
Onise nla kaa wo ise kogbon. 2
Iwa Rasulullah e jeka fi kogbon
Let us learn from the Great Messenger
The comports of Muhammed SAW we can
learn from.
In conclusion, one of the key messages here is to ensure we are humble enough to acknowledge our limitations and constraints. And therefore, seek God and respect fellow humans who may be our angels on earth. Humility is never a sign of foolishness but of someone that is at…