10 things Funke Akindele and Toyin Abraham have in common 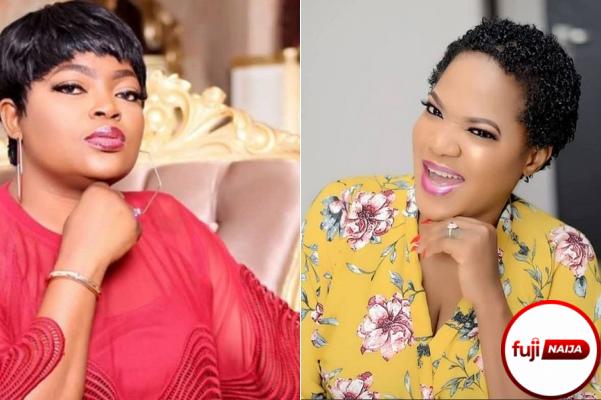 Top Nollywood actresses, Funke Akindele-Bello and Toyin Abraham are, arguably, no push overs when it comes to interpreting movie scripts to the letters. They are both very good, though one is somewhat dark in complexion while the other is fair. But do you know that there are up to 10 interesting things the 2 of them have in common that you may not have thought about? Yes, there are, and this writer would take you through the 10 in this prose.
To start with, Funke and Toyin are both predominantly, Yoruba actresses. Without mincing words, the 2 actresses became popular acting in Yoruba movies, and that is a fact no one could argue against. However, and secondly, Funke and Toyin can both act in English movie conveniently because they both speak good English. Thirdly, Funke and Toyin have both played comic characters in movies that became quite popular. Funke acted hers in Jennifer while Toyin did hers in Alakada.

Recommended:   Introducing Flutterpay: Making E-Payments Easier For Nigerians
Number four and quite interestingly, Funke and Toyin are both currently married to men who have had kids from other women. Both Rasheed Bello also known as JJC Skills (Funkes hubby) and Kola Ajeyemi otherwise referred to as Awilo (Toyins spouse) already have kids before marrying the actresses. And number five, both Funke and Toyin had failed marriages. Funke had with Kehinde Almaroof a.k.a Kendoo, while Toyin had with Adeniyi Johnson.
Number six, they have both being the face of same brand. Remember, Funke was the face of Nigeria Centre for Disease Control (NCDC) which is in the frontline of fighting against Covid-19 until a house party that went wrong made the disease fighting brand to drop her and brought on Toyin to replace her as the face of the brand. And seven, Funke and Toyin are both more popular than their equally, celebrity husbands. Funke is certainly more popular than Rasheed Bello, while Toyin is also more popular than Kola Ajeyemi.
Instant Download Now
Religion wise which makes number seven, both Funke and Toyin are Christians. Number eight, both Funke and Toyin have both been very controversial. Funke was at the height of her own controversy when she dated Femi Adebayo, and Toyin had hers when she had dalliance with Seun Egbegbe. Number nine, both Funke and Toyin live in different choice estates in Lekki, a posh area of Lagos. And number 10, they are both highly sought-after actresses in Nollywood as findings have shown that neither of them charges anything less than #1,500,000.00 (One point five million naira) for their box office movie roles which they have both been mostly engaged for in recent times.
And that makes the 10 interesting things your favourite actresses, Funke and Toyin have in common.
Source: (KemiFilaniNG)
Recommended:   History of Jùjú Music (Part 2) - Jùjú Musicans