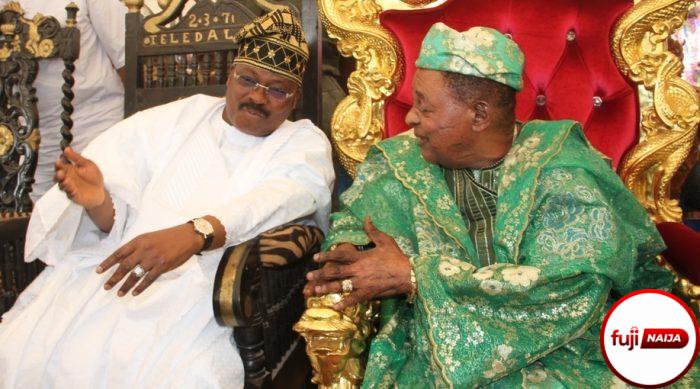 The Alaafin of Oyo, Oba (Dr.) Lamidi Olayiwola Adeyemi has described the late former Governor of Oyo State, Abiola Ajimobi as a leader who demonstrated the rare combination of thinking and doing.
He added that Ajimobi had exhibited the quality of a good leader who had the courage of not only taking actions but being ready to face the consequences of his actions.
Alaafin made the remark through His Chief Press Officer, Bode Durojaiye, in a condolence message made available to the Media on the demise of the ex-Governor.
Oba Adeyemi said Ajimobi came with a vision; he had courage and competence; he believed in probity and that is why Oyo State had a smooth primary.

The late governor was more interested in people who can sustain his institutional reforms and other legacies and not in his own personal preferences, he said.

Instant Download
Recommended:   How Has Technology Improved Christianity In Africa?

Ajimobi was the 20th governor that I have worked with. I have worked intimately as a son and as a governor. If you are brilliant, truthful and hardworking, he will work with you. He ran an inclusive government but you can only get something from him if you key into his vision of RTR, meaning reformation, transformation and repositioning.

The Royal Father pointed out that while institutions are important, a leader cannot be deemed to have succeeded, no matter how much he has achieved infrastructural renewal and other areas of development until he developed people who could succeed him and nurture the institution that he had built.
Said he, we had seen infrastructural renewal across the state; we had seen demolitions, emotions, and expressions. The former Governor had proved that he did not lack courage.
Alaafin, however, said unequivocally that the state will always remember the former Governor as the purveyor of unprecedented achievements that have far-reaching effects on the lives of the people.
Besides, Alaafin commended the deceased as unique and visionary for immortalising statesmen and heroes of the state by naming monuments after them while they were alive.
Oba Adeyemi who commiserated with the incumbent Governor, Engineer Seyi Makinde, the State Government, and the people of the State, prayed the Almighty Allah to grant the families fortitude to bear the irreparable loss. May God grant him eternal rest. Amen!